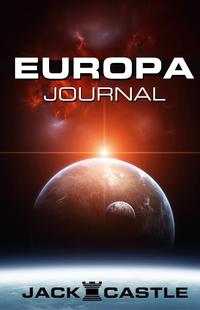 In 2168, a mysterious five-sided pyramid is discovered on the ocean floor of Jupiter’s icy moon, Europa. Commander Mac O’Bryant and her team of astronauts find the body of a missing World War II pilot, whose hands clutch a journal detailing what happened to him after he and his crew were abducted by aliens.

Jack Castle loves adventure. He has traveled the globe as a professional stuntman for stage, film, and television. While working for Universal Studios, he met Cinderella at Walt Disney World and they were soon married. After moving to Alaska, he worked as a tour guide, police officer, Criminal Justice professor, and certified weapons instructor. He has been stationed on a remote island in the Aleutians as a Response Team Commander and his last job in the Arctic Circle was protecting engineers from ravenous polar bears. He has had several Alaska adventure stories published along with articles in international security periodicals.