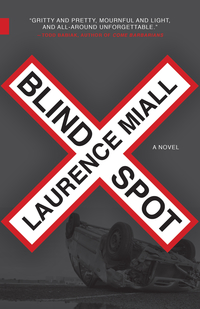 “Some days I wish something truly bad would happen so that I would have something genuine to worry about.”

When his parents’ car is hit by a train, Luke, a failed actor, returns to his Edmonton hometown to attend their funeral, wrap up their affairs, and prepare their house to be sold off. But while all others around him grieve, Luke remains detached, striking up a relationship with a woman in a neighbouring house... and stumbling across evidence that his mother may have engaged in a longstanding extramarital affair herself.

In Luke, Laurence Miall has crafted an unforgettable literary antihero, a man disconnected from the pain of those around him, yet blind to his own faults. With clean, forceful language and a familiarity with the darker corners of the male psyche, Blind Spot is a gripping literary debut.

Laurence Miall is a Montreal-based writer who spent his childhood in England before emigrating to Edmonton at the age of 14. Miall has contributed to The Edmonton Journal and his short stories have been finalists in the Summer Literary Awards contest and Glimmer Train's Short Story Award for New Writers. Blind Spot is his first novel.