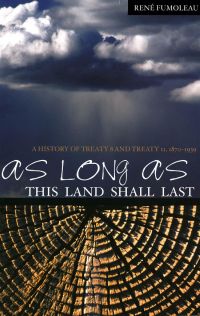 A historically accurate study that takes no sides, this book is the first complete document of Treaties 8 and 11 between the Canadian government and the Native people at the turn of the nineteenth century. On the basis of those treaties, contested in the Mackenzie Pipeline debate, white fur-traders, trappers, and corporations gave themselves privileges of ownership with no regard to the Native claim and to the promise made to the Natives that they could live and hunt there "as long as the sun rises, as long as the river flows, as long as this land shall last."

Historian René Fumoleau has delved into church and government sources to afford a clear picture of the negotiations for the treaties beginning in 1870 and their aftermath up to 1939. With an Epilogue by Joan Barnaby, the documents discussed in the book speak for themselves, implying a host of questions with both historical relevance and enduring significance.

René Fumoleau, a retired priest, produced the 1976 film I Was Born Here and directed Dene Nation in 1979. He has written two books of short stories and poems and has written for various newspapers and magazines in both French and English.