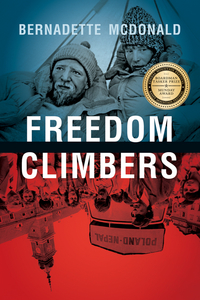 Freedom Climbers—the most honoured book of mountaineering literature published in Canada—tells the story of a group of extraordinary Polish adventurers who emerged from under the blanket of oppression following the Second World War to become the world's leading Himalayan climbers. Although they lived in a dreary, war-ravaged landscape, with seemingly no hope of creating a meaningful life, these curious, motivated and skilled mountaineers created their own free-market economy under the very noses of their Communist bosses and climbed their way to liberation. At a time when Polish citizens were locked behind the Iron Curtain, these intrepid explorers found a way to travel the world in search of extreme adventure—to Alaska, South America and Europe, but mostly to the highest and most inspiring mountains of the world. To this end, Afghanistan, India, Pakistan and Nepal became their second homes as they evolved into the toughest group of Himalayan climbers the world has ever known.

Bernadette McDonald is the author of ten books on mountaineering and mountain culture, including Alpine Warriors (RMB 2015), Keeper of the Mountains (RMB 2012) and Freedom Climbers (RMB 2011). She has received numerous mountain writing awards, including Italy’s ITAS Prize (2010), and is a two-time winner of India’s Kekoo Naoroji Award for mountain literature (2008 and 2009). In 2011, Bernadette’s first book with RMB, Freedom Climbers, won the Grand Prize at the Banff Mountain Book Festival (Canada), the Boardman Tasker Prize (UK) and the American Alpine Club’s H. Adams Carter Literary Award. Bernadette splits her time between Banff, Alberta, and Naramata, British Columbia.