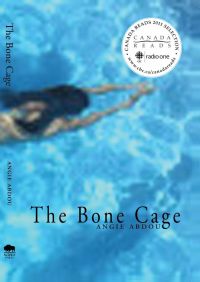 Digger, an 85-kilo wrestler, and Sadie, a 26-year-old speed swimmer, stand on the verge of realizing every athlete’s dream – winning a gold medal at the Olympics. Both athletes are nearing the end of their careers, and are forced to confront the question: what happens to athletes when their bodies are too worn to compete? The blossoming relationship between Digger and Sadie is tested in the intense months leading up to the Olympics, which, as both of them are painfully aware, will be the realization or the end of a life’s dream.

Angie Abdou began writing fiction in 2000 and has since published five books. Anything Boys Can Do was praised by the Times Colonist (British Columbia) for its original take on female sexuality. The Bone Cage, a novel about Olympic athletes, was the inaugural One Book, One Kootenay, as well as a 2011 Canada Reads finalist and the 2012 MacEwan Book of the Year. The Canterbury Trail (Brindle & Glass, 2011), is a dark comedy specifically about mountain culture and more generally about community and our relationship with the environment. The Canterbury Trail was a finalist for the Banff Mountain Book of the Year and won an IPPY (independent publishing award), Gold Medal for Canada West. Her fourth novel, Between (Arsenal Pulp Press), is about working mothers, foreign labour, and swingers' resorts. It was chosen as a best of 2014 by the Vancouver Sun, Prism Magazine, and 49th Shelf. Her latest book, What Remains (Arsenal Pulp Press), will be released in Fall 2017. Angie was born and raised in Moose Jaw, SK. She currently lives in the Crowsnest Pass area and works as a Professor of Creative Writing at Athabasca University.