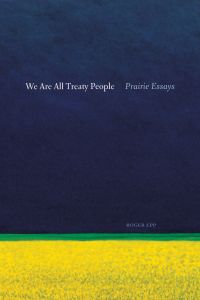 In his collection of Prairie essays-some of them profoundly personal, some poetic, some political-Roger Epp considers what it means to dwell attentively and responsibly in the rural West. He makes the provocative claim that Aboriginal and settler alike are "Treaty people"; he retells inherited family stories in that light; he reclaims the rural as a site of radical politics; and he thinks alongside contemporary farm people whose livelihoods and communities are now under intense economic and cultural pressure. We Are All Treaty People invites those who feel the pull of a prairie heritage to rediscover the poetry surging through the landscapes of the rural West, among its people and their political economy.

Roger Epp is Professor of Political Science at the University of Alberta. He served as founding Dean of the University’s Augustana Campus in Camrose from 2004 to 2011. Much of his recent writing has explored what it means to live in the prairie West with a sense of memory, inheritance, and care. He is author of We are All Treaty People: Prairie Essays (2008), co-editor of Writing Off the Rural West (2001) and co-producer of the documentary “The Canadian Clearances” for CBC Radio Ideas.