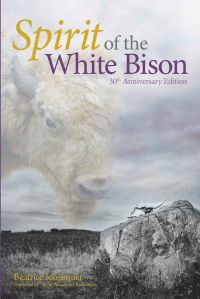 The Great Plains of North America was once home to great herds of bison. The Aboriginal people who lived there revered them and relied on them for food, clothing, and shelter. Into one of these great herds, Little White Buffalo was born in the 19th century. In this heartfelt story, she retells her life - a life that coincides with the devastation of the bison, destroyed by hunters and the coming of the railway.

Beatrice Mosionier was born in St. Boniface, Manitoba. The youngest of four children, she grew up in foster homes. After a short time living in Toronto, where she attended college, she returned to Winnipeg. Following the death of her two sisters to suicide, Beatrice decided to write In Search of April Raintree. First published in 1983, it has become a Canadian classis and launched the Manitoba literacy initiative On the Same Page in 2008. Beatrice has written more books of fiction, a play, a short film, and her memoir. She previously worked as a publisher of Pemmican Publications. Beatrice lives in Manitoba with her husband.