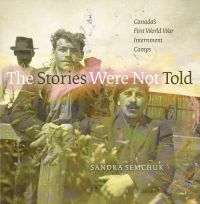 From 1914 to 1920, thousands of men who had immigrated to Canada from the Austro-Hungarian Empire, Germany, and the Ottoman Empire were unjustly imprisoned as “enemy aliens,” some with their families. Many communities in Canada where internees originated do not know these stories of Ukrainians, Germans, Bulgarians, Croatians, Czechs, Hungarians, Italians, Jews, Alevi Kurds, Armenians, Ottoman Turks, Poles, Romanians, Russians, Serbians, Slovaks, and Slovenes, amongst others. While most internees were Ukrainians, almost all were civilians.

The Stories Were Not Told presents this largely unrecognized event through photography, cultural theory, and personal testimony, including stories told at last by internees and their descendants. Semchuk describes how lives and society have been shaped by acts of legislated discrimination and how to move toward greater reconciliation, remembrance, and healing. This is necessary reading for anyone seeking to understand the cross-cultural and intergenerational consequences of Canada’s first national internment operations.

Sandra Semchuk is a photographic, text, and video artist, and the winner of a Governor General's Award in Visual and Media Arts (2018). She taught at Emily Carr University of Art and Design.